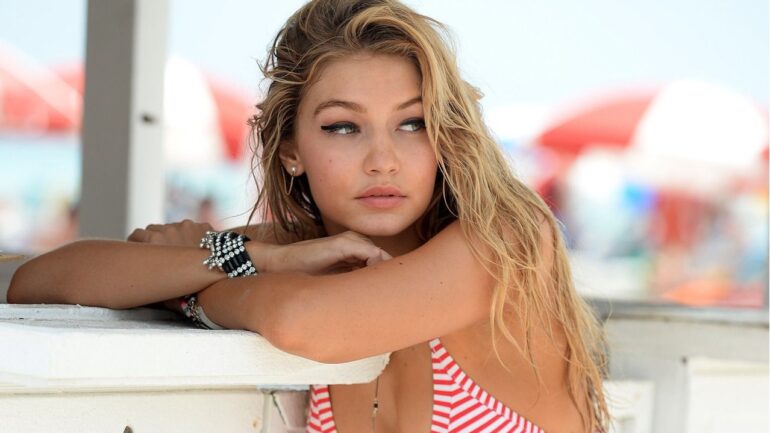 Gigi Hadid was born on April 23, 1995 in America. She is the children of real estate agent Mohamed Hadid and former model Yolanda Hadid she. Her father is Palestinian and her mother is Dutch. She moved to New York after high school to focus on her studies and modeling. She studied at The New School in 2013 she. Hadid started modeling when she was two years old. It was discovered by Paul Marciano. She returned to modeling in 2011 and continued working with Marciano. She was selected for the Guess campaign in 2012 and organized three campaigns with Guess she. After moving to New York and modeling for IMG in 2013, she walked the runway for Desigual’s show in New York Fashion Week in February 2014. That same month she appeared on the cover of CR Fashion Book. She was on the Pirelli calendar in 2015. In the same year she became the brand ambassador for the Australian swimwear brand Seafolly.

Hadid announced that she was diagnosed with Hashimoto’s disease in 2014 and showed symptoms again in 2016. In December 2015, she made her debut at the Victoria’s Secret Fashion Show. Hadid has appeared on the covers of Vogue magazine. She walked on Victoria’s Secret Fashion Show for the second time in December 2016. She announced in May 2018 that she will be working with Unicef ​​to help children around the world. It was announced that Gigi Hadid was diagnosed with Hashimoto’s disease in 2014, and this was repeated in 2016. She started dating British singer Zayn Malik in 2015. They broke up in March 2018 and then reconciled in June 2018. But they left again in November 2018.

In 2017, Hadid tried to go to Shanghai to attend the 2017 Victoria’s Secret Fashion Show, but her Chinese visa was reportedly revoked. In April 2020, Hadid publicly confirmed her pregnancy during an interview on The Tonight Show after rumors about her pregnancy started circulating. In September 2020, Hadid and Malik gave birth to their daughters on a farm in rural Pennsylvania where they had been isolated since May during the COVID-19 outbreak.