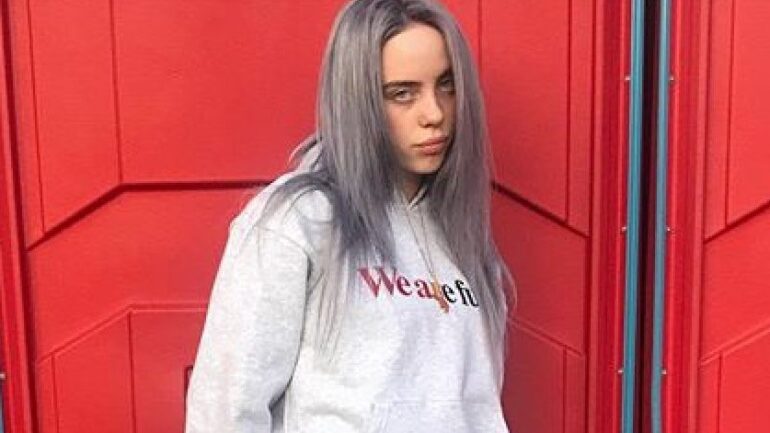 Billie Eilish was born on 18 December 2001 in the USA. Her parents are amateur musicians. She is of Irish and Scottish descent. While she was homeschooling, her mother taught her and Finneas the basics of songwriting. Eilish and her brother have performed while writing and producing their own songs and with her group. Eilish said that her brother and mother inspired her to study music.

She drew attention when she uploaded the song “Ocean Eyes” to SoundCloud, first released in 2015 by Darkroom, a subsidiary of Interscope Records. The song was written and produced by her brother Finneas O’Connell. Her debut EP, Don’t Smile at Me (2017) became a hit, entering the top 15 in the US, UK, Canada and Australia.

Eilish’s debut studio album When We All Fall Asleep, Where Do We Go? (2019) debuted at number one on the Billboard 200 and became one of the best-selling albums of 2019. It reached number one in the UK. The album’s fifth single, “Bad Guy”, debuted at number one on the Billboard Hot 100 chart. It has five Grammy Awards, two American Music Awards, two Guinness World Records, three MTV Video Music Awards and a Brit Award. In 2019, Time magazine placed her on the first Time 100 Next list. Additionally, according to the Recording Industry Association of America, Eilish is the 23rd major artist of the era of digital singles, selling 40 million singles in the US alone.

Eilish continues to live with her family in the Highland Park district of Los Angeles in 2020. She explained that she was living with She Tourette’s syndrome, depression and synesthesia. In a 2020 radio interview, her parents announced that they were considering taking her to therapy because of her childhood obsession with Justin Bieber.